A debate is occurring on the ARIN PPML whether or not to remove needs analysis from small address transfers. Draft policy 2014-14, originally authored by an individual affiliated with an IP address brokerage, proposes

For transfers larger than a /16 equivalent or for recipients who have completed a needs-free transfer in the prior year, recipients in the ARIN region must demonstrate the need for up to a 24-month supply of IP address resources under current ARIN policies and sign an RSA.

The rationale offered by the author of the proposal is that

ARIN staff, faced with a surge in near-exhaust allocations and subsequent transfer requests and a requirement for team review of these, is spending scarce staff time on needs testing of small transfers…Needs testing has been maintained for transfers largely because the community wishes to ensure protection against hoarding and speculation in the IPv4 market. This proposal seeks a middle ground between the elimination of needs tests for transfers altogether, and the continuance of needs tests for every transfer. This should help ARIN staff to reduce transfer processing time, since most transfers have been smaller than /16.

While the proposed policy would only apply to smaller blocks for some buyers, the idea of limiting needs analysis is again being met with resistance. One opponent even argued that only tiny /24s (256 addresses) should be allowed under the policy.  Even in its most progressive form, the policy would be a far cry from the liberalization undertaken elsewhere. If you remember, the RIPE region completely eliminated needs analysis in Feb 2014.  We noted in a 2013 paper that we could only evaluate the impact of needs analysis policies if and when there were regional differences.  With almost 6 months behind us since that point, how has the transfer market responded to differences in policies? 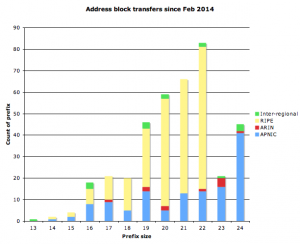 If we look at Figure 1 above, which presents the number of address blocks transferred and recorded by the RIRs since February 2014, the answer to that question is about as one would expect.  Overall, 386 transfers have occurred. Just eleven (11) transfers have occurred within the ARIN region. Fifteen additional transfers, including a /13 (524,288 addresses), have been inter-regional from ARIN to APNIC. The ARIN blocks transferred are randomly distributed, with no particular size block dominating. About a third of all transfers (128, 33%) have occurred within the APNIC region, although that RIR continues not to distinguish M&A or internal transfer activity, so the number is likely somewhat inflated. The transfers in the APNIC region are skewed toward smaller /24 blocks.

But the big takeaway from the data is that the majority of transfers (232), almost 10 times the amount occurring within the ARIN region,  have occurred in the newly liberalized RIPE region. The amount of block transfers occurring in the RIPE region over the last 5 months is more than double the amount of the previous 5 months.  The blocks transferred there are concentrated on the /19-/22 range.  Such dramatic difference in numbers hardly seem attributable to chance.

So it appears that removing needs analysis in the region may indeed be freeing up IPv4 resources.  As for the fears of hoarding and speculation? A cursory review of the reported data suggests no accumulation of blocks by any one entity. A variety of buyers and sellers are exchanging resources.  Nor is there any evidence of individual block(s) being flipped. The data suggest that removing needs assessment for small blocks is working in the RIPE region with no problems; if the ARIN region continues to restrict market transfers they are harming, rather than helping, address blocks move to more efficient uses.