Share
Posted on May 26, 2020 by Milton MuellerFree Expression Online, Geopolitics of IG

Few social scientists have advanced studies at the intersection of information technology and security as much as Thomas Rid. His 2011 book, Cyber War Will Not Take Place, analyzed cyber conflict from a critical point of view, shattering the myth that actual wars would be fought and won through cyber means, and offering a more realistic characterization of the relationship between cyber-infrastructure and military conflict among states. 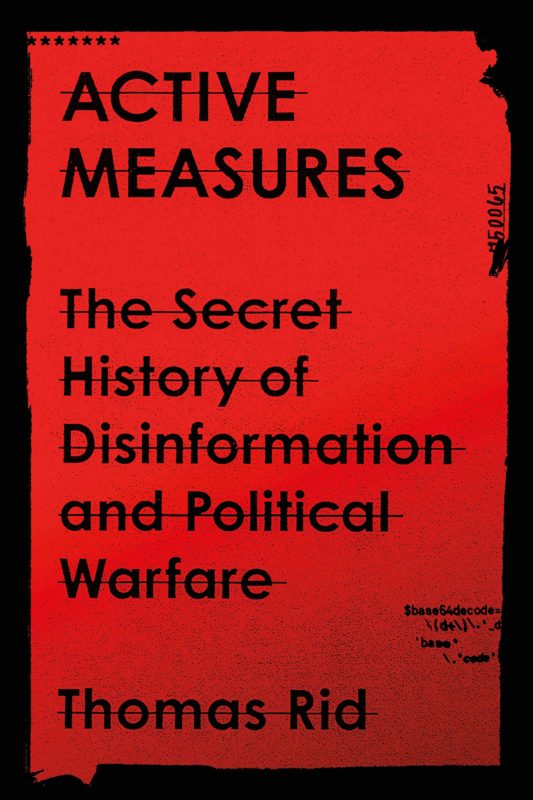 Rid’s latest book, Active Measures: The Secret History of Disinformation and Political Warfare, takes on information operations, those organized acts of deception, leaks of confidential information, forgery and political manipulation via public media that governments use to weaken their opponents. Unlike cybersecurity, which deals with the technical confidentiality, integrity and availability of information and networks, active measures are about semantics, about the meaning and interpretation of content. In our polarized environment, with the Right screaming about “fake news” and dismissing everything in the “lame-stream media,” and the Left claiming that YouTube elected Brazil’s Bolsonaro and the Russians elected President Trump, the topic could not be more central.

Rid shows that he knows how to attack a theme that is white hot while maintaining high standards of scholarly investigation and argumentation. His account is a sincere attempt to understand the phenomenon and he offers a mostly well-balanced account (I will address some of the omissions later). Unlike his cheesier counterparts, who trade on the sensationalized concept of “information warfare” and aim to exploit the political divisions it has created, Rid offers a carefully focused and empirically grounded treatment of the topic.

Rid tries to dispel common misconceptions about IO, particularly the notions that disinformation is always well-crafted, that it propagates false news, and that it occurs in the public sphere. In fact, active measures are often messy due to their contradictory status as “covert operations designed to achieve overt influence.” Generalizations about “fake news” miss the mark: “some of the most vicious and effective active measures in the history of covert action were designed to deliver entirely accurate information.” These truths, however, were often “flanked by little lies” about the provenance of the data or the identity of the publisher. He also shows that many influence operations do not take place in public, a notable example being the 1972 defeat of a no confidence vote in Germany’s Parliament, which relied on private lies that swayed two critical votes.

Rid’s insights are based on a historical method. The book tracks the uses and evolution of AM, covering failures as well as successes, from the early 20th century to 2017. Three cases from the 1920s and ‘30s are followed by a section on AM by both the Americans and Russians in Berlin in the 1950s and early ‘60s. Two more sections focus exclusively on Soviet AM in the later phases of the Cold War, when it had become a refined art supported by large organizations and big budgets in East Germany and Moscow. The section on the 1980s is highly detailed, full of novel incidents and insights. He brings the narrative into the digital age with explorations of role of leak platforms, the DNC hack, the Internet Research Agency, the still unattributed Shadow Brokers leak and its relationship to the NotPetya attacks.

The importance of the historical method cannot be overstated. It instantly shatters the naïve view that organized disinformation is a problem unique to the digital age; it gives us a valuable and informative overview of how IO adapts to different socio-political constellations. It emphasizes the continuity of AM techniques and players over time, and allows us to assess the effects of operations more dispassionately. The treatment throws into sharper relief the similarities and differences in AM as information technology changes. The stories it has to tell are entertaining as well.

If the historical method is the book’s strength, it also gives rise to one of its limitations. Rid spent time in Stasi archives and interviewed practitioners of AM in Eastern Europe and the US. With his primary source material coming from that Cold War milieu, his historical account is heavily centered on conflicts between Russia and America, and most of the active measures he tracks were initiated by the Soviets or their partners. A full account of American disinformation campaigns and political warfare is missing from the book. However, being situated in the long-term US-Russia conflict also means that his treatment is firmly grounded in a specific context and is not a bunch of free-floating abstractions.

Among the insights Rid offers is that overestimating the threat of disinformation can be as dangerous as underestimating it. The book shows that the performance of the Russian Internet Research Agency’s trolling campaign was very weak, “but the House Democrats’ release of the Facebook ads turned the ads, and the trolls’ wider Facebook outreach, into a spectacular disinformation success story.” The original Facebook messages failed to create fissures in American society, but the ensuing debate over Russian collusion was the gift that kept on giving. Similarly, unmasking a disinformation measure can actually prolong its effects by revitalizing the publicity around it and reopening the divisions that the original targeted.

This reader was especially interested in Rid’s treatment of the interactions between civil society activists/protestors and state-directed information operations. Clearly, when an organized movement opposes its own government, especially around issues of war and peace, influence operations by the foreign opponent (and counter-measures by the host government) become highly salient. During the Cold War, American and European peace movements were, of course, subject to united front tactics and attempted manipulation by the Soviets. Friedenskampf, which translates into the Orwellian phrase “peacewar,” was the name that Stasi gave to its efforts to infiltrate and utilize the European peace movement. In his discussion of the 1980s, Rid debunks the claim that the Soviets created the whole “nuclear winter” theory to prevent deployment of Pershing missiles.

Rid also traces the history of anti-war activists who leaked US government documents, a history that goes well beyond Snowden and Assange. While most today probably remember Daniel Ellsberg and the Pentagon Papers, Rid deepens the coverage by examining Perry Fellwock, K. Barton Osborn, Timothy Butz, former military men who founded the Committee for Action/Research on the Intelligence Community and its publication Counterspy; Norman Mailer and the Fifth Estate; and Philip Agee, the former CIA officer who turned on the agency and wrote Inside the Company in 1975. Rid asserts that the activists “were publishing, researching, and collecting compromising intelligence – in short, they were running their own form of active measures.”

Agee was hounded by the American and British governments as Assange was recently, though movement support in Europe prevented his extradition. Rid notes that Agee did receive support from the Cubans and Soviet intelligence, but adds that a partial forgery leaked by Agee was given to him anonymously by the KGB, because the KGB was “keen to maintain Agee’s belief that he was occupying the moral high ground, acting not in the interest of an adversarial spy agency but in support of the higher principles…”  Rid therefore rejects the dichotomy between “genuine activist” and “useful idiot” programmed by a foreign power; he believes you can be both at the same time. Here Rid touches upon, but does not deeply explore, one of the critical issues raised by the book. If all the investigative and publicity activity we associate with journalism and political discourse is considered a form of “active measures,” then where does one draw the line between the free exchange of ideas and robust political debate, on the one hand, and manipulation by a foreign power on the other?

In general, Rid’s book falls short when it comes face to face with the problem of how a free society deals with foreign-inspired disinformation campaigns. It’s not that he says anything wrong about it; he just does not have much to say about appropriate defenses, responses or policies. Once you get beyond the important but obvious insight that “It is impossible [for a government] to excel at disinformation and democracy at the same time,” there is not much there. Rid documents the ways active measures exploit certain features of a competitive, pluralistic media system, such as the desire for scoops, and claims that “at-scale disinformation campaigns are attacks against a liberal epistemic order.” But are these vulnerabilities inherent in social orders built upon liberal democracy and free expression? If so, does that mean we should change them? If it does not mean that, what does it mean? Rid doesn’t follow up on those questions. Perhaps it’s not fair to expect him to do so, it wasn’t the purpose of the book. But the appeal of the book, what makes it interesting to most readers, stems from precisely those questions.