We join the chorus of protest and outrage caused by the Trump administration’s Executive Order on immigration. In the name of protecting the country from terrorism, the Order restricted travel from 7 arbitrarily-designated countries, and has even refused entry to people with well-established legal immigrant status, such as Green Card holders. Even after the intervention of the courts and a minor backing down by the Secretary of Homeland Security, Green Card holders from the designated countries can still be subject to “case by case” scrutiny and crippling uncertainties and threats regarding their travel and their ability to live and work in this country. 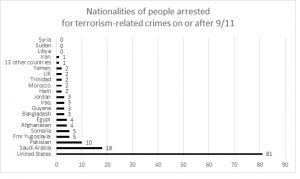 There is no serious national security rationale for the order. Any claims to the contrary are thoroughly refuted by statistics circulated by the New America Foundation and the Wall Street Journal today. (See chart) The Cato Institute also published a quick but incisive analysis eviscerating some of the numerical claims that have been made to support this policy. The data show that the most problematic nationality is the United States. The restrictions excluded nationalities such as Saudi Arabia and Egypt, the sources of a significant number of terrorism-related arrests, including the historic 9/11 attacks. It imposed new and disruptive restrictions on nationals from Syria, Sudan and Libya – countries with zero arrests – and on Iran, which had only one arrest. There is simply no rational relationship between the restrictions imposed by this ban and the risks associated with the likely sources of terrorism. Even if there were, nationality is a terrible guide to spotting terrorists. Terrorists or people prone to it are a tiny minority of any country, and for every country that has hostile dictators or terrorists in it there are millions who want to come to the United States precisely in order to escape those things.

Many of the protests view this as a “Muslim ban” and (citing Trump’s openly stated willingness to discriminate in favor of Christians from the Middle East) characterize it as religious discrimination. We think this is mostly wrong. Professing love for Muslims and religious diversity misses the target, dangerously. The problem we face is actually worse than a Muslim ban.

The real problem is that this Presidency is motivated by a primitive and blind reaction against global society itself. It wants to disrupt the increasingly transnational flow of people, ideas and goods in order to act out these impulses. Trump’s campaign made globalization the scapegoat for America’s problems. Hence, the administration is willing to subject millions of innocent people to major costs, uncertainties and fears simply because they are foreign, or of foreign origin. Expect this impulse to play out in a number of ways. The Trump Presidency is all about closing the country off, building walls, throwing up protective barriers.

Look at this as a new kind of class warfare. The Trumpians are at best entirely ignorant of, and at worst fundamentally hostile to, the cosmopolitans in science and technology and in digital industries who routinely engage in foreign travel. They are deaf to the facts that higher education is one of our biggest export industries, and millions of talented young people come here to develop a career. There are disturbing accusations that the President’s strategic advisor, Steve Bannon’s, fear of successful immigrants from different countries played a role in making the Executive Order broader and more onerous.

This has significant implications for Internet governance. Coordination and policy making for a global medium based on cooperation and voluntary standards requires open transnational institutions. Participation in those institutions requires the ability to freely travel. The United States can no longer be considered the leader, either politically or ideologically, of an open global Internet if its own society is mired in protective barriers. Travel, trade and communication reinforce each other. Trade fosters the movement of people and goods, and stimulates additional forms of business, cultural and political ties. Start making travel burdensome and risky and you throw significant sand in the gears. Add to that protectionist trade policies and things could really start to unravel. What a stroke of good fortune that the prior administration succeeded in freeing ICANN from the U.S. government in its waning months.

Although some members of the Republican Party have bravely criticized the Executive Order, for the most part Trump is harvesting the political fruits of the Republicans’ growing tendency to wink at and exploit nationalist tendencies and anti-immigration hostilities over the past two decades. If they think it is a politically winning strategy, they will keep at it. Fortunately, the Order seems to be a major loss for the President politically. Protests have erupted all over the country, key Republicans are defecting, and Democrats are mobilizing to propose legislation rectifying these mistakes. Even the staid American Enterprise Institute published a blog criticizing the order, saying of Trump that “issuing what can only be described — generously — as a half-baked, quickly-drafted, not-scrubbed, not run through the interagency, not well-considered executive order makes the executive himself look like an ass, and his policies look capricious.”