Facebook has unleashed a new PR barrage expressing its support for “updated Internet regulations.” As we pointed out two years ago, when a dominant media incumbent embraces government regulation, supporters of open markets and free expression need to watch out. But the problem with these ads is not just that they reinforce Facebook’s earlier self-serving message. They put out a provably false narrative. 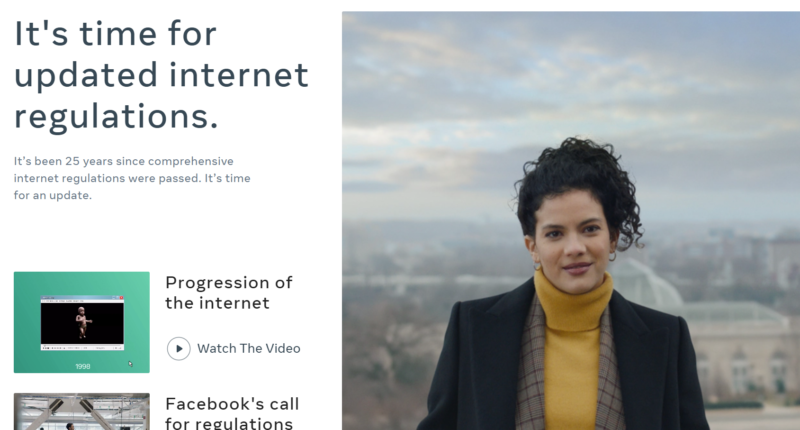 No “comprehensive internet regulations” were passed in 1996. A sweeping reform of telecommunications regulation, the Telecommunications Act of 1996, was indeed completed that year – but it culminated a 20 year attempt to introduce competition into traditional, pre-internet telecommunications markets. Its language refers mainly to telephone companies, cable TV operators, broadcasters, universal telephone service, TV ratings, and radio frequency management. The word “internet” appears only 11 times in that law, and 10 of them are in Section 230. Section 230 was not “comprehensive internet regulation” but dealt with the narrow issue of an information service provider’s liability for content posted by its users.

It’s a real whopper to say that “not much at all” has happened since then. Between the 105th Congress (1997-1998) and the 116th Congress (2019-2021), over 300 bills related to the Internet were enacted by the U.S. Congress. These include the Children’s Online Privacy Protection act (COPPA) (2000), the Anti-Cybersquatting Consumer Protection Act of 1999, the Can SPAM Act of 2003, various iterations of the Internet Tax Freedom Act (1998 – 2015), the CLOUD Act (2018) and quite a few cybersecurity-related laws (such as Cybersecurity Information Sharing Act of 2015, the TRACED Act of 2019, the IoT Cybersecurity Improvement Act of 2020). Numerous laws pertaining to broadband development and subsidies also passed.

In the meantime, the Federal Communications Commission modified or generated countless Internet regulations in the same time span, most notably the battle over net neutrality and the classification of ISPs as information service providers or common carriers. And we are not even mentioning laws, policies and regulations at the state level or outside the United States – little things like GDPR, the German NetzDG, the Right to be Forgotten. There has been a lot of action on the “Internet regulations” front.

As the size and socio-economic significance of the Internet has grown, we see continuous legislative and regulatory efforts to make new rules and policies, or to adjust old ones.

What do you mean by “updated regulations?”

The trope that Internet service is saddled with obsolete rules from a bygone era is PR spin from an interested actor. Calling for “updated” rules conveniently avoids the question of what exactly is obsolete or dysfunctional about existing laws and regulations, and who is harmed by them. If Facebook wants us to take its call for legislative or regulatory reform seriously, it is going to have to be a lot more forthcoming about that.