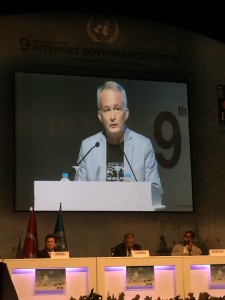 I thank our host country and the IGF Secretariat for the excellent facilities and well-organized event. I also want to shout out to the Turkish alternative informatics activists for their courage and commitment in mobilizing an Ungovernance Forum.

Looking back over the past four days, we’ve had an intense dialogue about the problems and issues posed by Internet governance. The excitement comes from the feeling that we are building some new kind of political community, maybe even pioneering revolutionary new forms of governance. At this closing, I’d like to take this idea a bit further than it has been taken before.

Right now, for better or worse, we’ve attached the label “Multi-stakeholderism” or “the multistakeholder model” to this system – and it has taken hold. But what a lousy label. What an ugly term. I can see people marching for liberty and equality. I can see them laying down their lives for popular sovereignty or human rights. But multi-stakeholderism? Really?

This isn’t just about words. I think the label actually misleads us, frames the political debate in the wrong way. The global Internet governance debate is not really about having multiple stakeholders in the same room to discuss and negotiate policies, because the old system of (democratic) governments and intergovernmental organizations tried to achieve that too, albeit in a different way. The key difference is that multi-stakeholderism elevates transnational non-state actors to the same status as governments. And that’s a radical challenge to the state’s claim to supreme authority, to sovereignty.

So maybe John Perry Barlow’s Declaration of the Independence of Cyberspace is worth a second look.

Barlow’s idea that the internet was immune from control by existing governments has been discredited. But remember, Barlow drafted a declaration of independence. Such a declaration does not necessarily mean that existing nations have no power; it means that the residents of cyberspace want a distinct nation of their own.

You might laugh at that assertion. An Internet nation? What does it mean? Surely, everyone knows that nations are territorial, that the physical facilities of Internet service providers are located in a jurisdiction ruled by a government. Jurisdictions and laws are attached to Internet users as well. But these arguments carry much less weight than one might think.

There is nothing terribly crazy or controversial about the concept of an Internet community. Clearly, the Internet provides the basis for a community with its own interests, an incipient identity, its own norms and modes of living together. And it is only a small step from community to nation. A nation is just a community that wants its own state. So it doesn’t really matter whether existing sovereigns currently have the power to impose their rules on them. What matters is whether that Internet community can be organized to assert, and gain, its political independence.

Existing sovereigns already had dominion over the American colonies when they declared themselves independent; Asia, Latin America and Africa were carved up by foreign powers prior to their independence. Every movement for political autonomy has had to displace some pre-existing form of sovereignty. Every nation is an invention, an imagined community.

What we need now is an internet national liberation movement.

But how would an internet nation function? How would it assert its sovereignty against other states? These are tough questions, which can’t be fully answered here. But pioneers in this field have already hit upon some of the key techniques. One is to globalize technology and content flows. Another is to keep the core technical coordination functions out of governmental hands. Another is to radically undermine, a la Wikileaks and Edward Snowden, the exclusivity of the data and intelligence that national governments enjoy. Bitcoin has even shown that we can have a global, nonstate currency through digital technology.

We don’t want to destroy territorial governments. They do important and useful things within their territories. It’s just that they are the wrong political units for doing global Internet governance. We need a new political community for that, and that, I hope, is what we are building here.