As the new year dawns a new IANA is emerging, but the outlines are still blurry. IGP has reviewed all the public comments submitted in response to the CWG’s draft proposal. The results can be seen directly here. Two-thirds (67%) of the comments directly addressing the issue supported the core ideas behind the draft: that the IANA functions operator should be separable from ICANN, and that there should be an external oversight entity with the authority to award the IANA functions contract on a periodic basis, just as the NTIA did before. But there were many concerns raised about the details of the proposal, especially the composition of the so-called Multistakeholder Review Team (MRT) and the jurisdiction of the contracting entity.

One of the sleeper issues is jurisdiction, specifically the jurisdiction in which the Contract Co. would be incorporated. The government of Brazil, an Indian think tank, and CNNIC (the state-owned country code registry for China) all highlighted the issue in their comments. China in particular called for the jurisdiction to be in a “neutral” country. 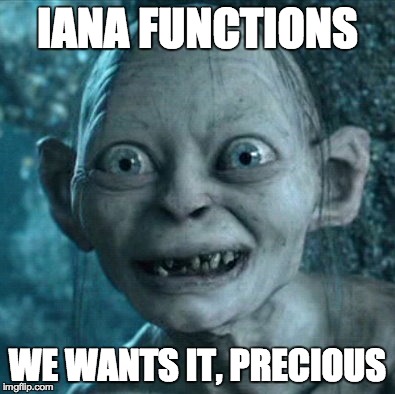 A group of ICANN supporters made a concerted effort to overturn the CWG draft proposal and replace it with an alternative solution that would give ICANN permanent control of IANA in exchange for unspecified future accountability reforms. An internal solution was promoted by ICANN itself, the At Large Advisory Committee, and organizations whose current participation in ICANN is led by current or former ICANN board members such as Google and AuDA. But the internal solution failed to win widespread support. Only 8 of the 43 organizations or individuals who expressed an identifiable opinion on the subject supported giving IANA to ICANN forever, and just as many commenting entities expressed principled opposition to the idea.

Though it was not willing to accept the CWG proposal in its current form, the gTLD Registries stakeholder group stated “We believe that some form of a contract with the IANA Functions Operator is necessary to establish key requirements of the IANA Functions Operator currently provided for within the NTIA agreement. As such, a contracting entity is likely a requirement of any IANA Stewardship Proposal for the naming community.”

The public interest group Center for Democracy and Technology stated: “We are not comfortable with the ‘alternative proposal’ outlined in the consultation document which would see the IANA function remain with ICANN without any independent oversight or ability to rebid the contract.”

The Registrars stakeholder group agreed:  “[G]iven the present state of accountability within ICANN, [a] Contracting Co. must exist. … To be clear, the RrSG supports the possibility of separation, and the ultimate accountability measure that a potential loss of contract would imply for ICANN.” The Internet service providers comments made a similar point. The Noncommercial Stakeholders’ comments said it “strongly opposes proposals to turn over permanent responsibility for the names­-related IANA functions to ICANN, Inc. … Without separability, we have significant concerns about ICANN’s performance, its accountability to the global multistakeholder community, its susceptibility to capture and the separation of policy from implementation.

Brian Carpenter, a former chair of the Internet Architecture Board, wrote:

There is no reason we should grant ICANN an indefinite monopoly. (In other words I am very much against a solution in which all NTIA responsibilities [are] transferred to ICANN.)

While the generic names community is solidly behind the contracting approach, the country code top level domain registries were split 5 to 6 in their views. The Australian (AudA), Norwegian (NorID), British (Nominet) and Dutch (SIDN) ccTLD operators expressed mixed views regarding separability, as did the European-focused ccTLD association CENTR. On the other hand the German (DENIC), Danish (DIFO), Canadian (CIRA), Chinese (CNNIC), and New Zealand (InternetNZ) ccTLDs expressed support for the external contracting authority model, and so did the Latin American ccTLD association LACTLD.

Among the ccTLDs sympathetic to an internal solution, there was a “have your cake and eat it too” flavor, however. While they didn’t like the complexity of the CWG model, they still wanted some kind of latent capacity to change the IANA operator. Their attitude was typified by Nominet’s comments that it could accept either model, but prefers to build new stewardship model around ICANN with “binding obligations and the potential to set up a new entity.”

How does one maintain the capacity to “set up a new entity” if IANA is owned by ICANN? That ambiguity highlights one of the key conceptual flaws in any internal solution. Permanent control of the IANA naming functions by ICANN is presented as something that is less complex (because it relies on existing structures) and less risky (because it does not require a new entity that might malfunction or be captured). However, both claims fall apart as soon as one starts to fill in the details. The viability of these proposals relies on unspecified bylaw changes or massive changes in corporate structure that could be even more destabilizing and complex than the CWG plan. In other words, an internal solution will require new entities and new structures as well. In effect, advocates of an internal solution are urging us to reject a plan the basic outlines of which are known and widely discussed in favor of a completely unknown set of reforms that will emerge at some time in the future out of a Cross Community Working Group on the Accountability of ICANN’s policy making process – a working group whose results can be vetoed by ICANN’s board! As for complexity, when ALAC attempted to present an outline of its alternative proposal during a CWG teleconference, the diagram of new relationships among ICANN entities was so tangled that few observers could make sense of it. The ALAC presenter himself had to back off and admit that it was just “a work in progress.”

The Business Constituency comments suffered from a similar flaw. The BC said that the community can rely on the Accountability reforms rather than separation of the IANA functions; for example, dissatisfaction could lead to “spilling the board.” But this comment shows a complete lack of understanding of the purpose and nature of the IANA stewardship transition. It conflates the accountability of ICANN’s policy making process with the accountability of the IANA naming functions operator. The ICANN board has numerous functions other than running its IANA department. Most of those functions have to do with making and implementing policy. Spilling the board over IANA performance would use a nuclear weapon where a sniper shot might be more appropriate.

It is completely wrong to assume that reforming ICANN’s policy process will automatically ensure that the IANA functions are run properly. Making ICANN’s policy development process, and its staff’s contractual implementation and enforcement processes, more accountable to involved stakeholders is a very different kind of problem than ensuring that the IANA naming functions operator correctly, efficiently and reliably implements technical changes in the root zone file. Not only do these two things require very different kinds of organizational structures and inputs, they can easily work at cross-purposes. A dominant faction in the policy community could try to undermine the independence and neutrality of IANA root zone changes if the accountability mechanisms of ICANN and of the IANA naming functions operators are too closely linked. An IANA that is part of the same organization and fully accountable to the policy development process could easily be swayed by demands that have nothing to do with the accuracy, integrity and reliability of the performance of the IANA functions.