[Updated Oct 31 with event summary, video and other news coverage.] 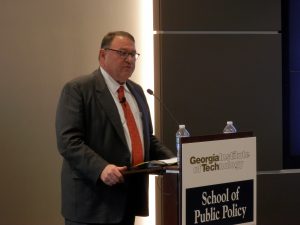 On October 26, the School of Public Policy’s Internet Governance Project (IGP) hosted an event honoring Assistant Secretary of Commerce Lawrence Strickling. Strickling, who also holds the position of Administrator of the National Telecommunications and Information Administration (NTIA), played a leading role in one of the most innovative Internet policies ever made:  the transition of the Internet to private governance.  Not only is this new policy significant for the Internet sector, it breaks new ground in the institutional design for the governance of any sector.

On October 1, 2016, the contract between the US Commerce Department and the Internet Corporation for Assigned Names and Numbers (ICANN) was allowed to expire. ICANN will no longer be a creature of the US government, but a free-standing institution accountable to the global multistakeholder community. The transition occurred after the community of stakeholders around ICANN spent two years of intensive work developing a new institutional structure for the governance of the Internet’s “IANA functions” and ICANN’s corporate governance generally.

This Internet privatization was preceded by nearly two months of controversy, some of it centered in the US Congress.  Opponents claimed the transition was “giving away control of the Internet to Russia and China,” while supporters of the move, which included Georgia Tech Professor Milton Mueller, deemed it a step toward “transnational popular sovereignty” in global Internet governance. Not until 6 pm on September 30, when a Texas judge denied a last-ditch legal challenge, was it clear that the transition would go through.

Georgia Tech was the venue where the NTIA’s Strickling reflected publicly for the first time on the new policy.  About seventy-five students, faculty and interested members of the community attended, and another 30-40 watched the simultaneous webcast. SPP Chair Kaye Husbands-Fealing welcomed the participants. After a speech recounting the historical background and political significance of the transition, IGP Director Milton Mueller introduced Assistant Secretary Strickling, who spoke about the virtues and limitations of the so-called multistakeholder model of Internet governance, which relies on nongovernmental institutions and open and voluntary working groups to make policy. 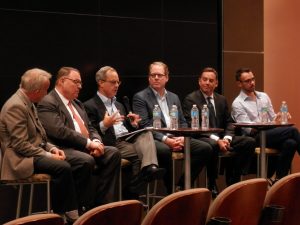 A paragraph from Asst. Secretary Strickling’s speech summed up the sentiments of many:

Looking back on this two-year effort, is there any question whether we were correct to call on the multistakeholder community to develop the transition proposal?  I believe without a doubt that we were.  Could any other process have brought together the views and ideas of so many people in such a short period of time to solve such complicated and important issues?  I do not think so.

On Wednesday, October 26 the Internet Governance Project at the Georgia Institute of Technology’s School of Public Policy honors Assistant Secretary of Commerce Lawrence Strickling for his leadership in bringing about the privatization of ICANN. The event will also explore the implications of the transition for the future of Internet governance. The public is invited.

The transfer of contractual control of IANA from the US Commerce Department to the operational communities is one of the most significant events in the evolution of the Internet, and is also a major development in the global governance of information and communications. ICANN’s 1998 creation was a major innovation in supra-national rule-making, comparable to the creation of the World Trade Organization (WTO) in the 1990s or the UN’s International Telecommunications Union (ITU) in the 1860s. ICANN’s privatization, which occurred last Saturday, October 1, allows its rule-making to cross political borders, and puts in place a new type of global regime that is without precedent.

Assistant Secretary Strickling will be the featured speaker at this event, receiving recognition for his persistent and principled commitment to putting “the global multistakeholder community” in charge of IANA and ICANN. The event will also feature remarks on the long term implications of the transition by a panel of experts, including Internet Architecture Board Chair Andrew Sullivan, Georgia Tech professors Milton Mueller and Peter Swire, the Internet Society’s Senior Policy Advisor Konstantinos Komaitis, and Verisign’s Vice President for public policy and government Keith Drazek.

A live webcast will be available here

5 thoughts on “The self-governing Internet”