The Declaration for the Future of the Internet

On April 28 the United States released the result of its attempt to rekindle a positive vision for Internet governance. It is called “A Declaration for the Future of the Internet” and has been endorsed by about 60 countries.

Let’s talk first about the background of the Declaration. It has been in the works since September 2021, when a leaked document revealed some of the outlines of what the Biden administration had in mind. We analyzed this earlier document and noted some of the dilemmas it posed and the way it might actually be fomenting fragmentation of the internet. A December consultation by White House advisor Tim Wu at the UN Internet Governance Forum in Poland gained additional public comment.

The new document is very different, and seems to have responded to feedback from the original proposal. The idea of an “alliance” has been downgraded to a “declaration.” Previously, the alliance was being described as a membership-based collection of governments “that ensures reciprocity among members and adherence by governments to a set of minimum standards.” This implied an intergovernmental coalition that would extend benefits to members and from which certain states could be excluded. That’s been dropped. Equally important, all language suggesting that the U.S. would tie this Declaration to its efforts to target and isolate Chinese telecommunication equipment and service providers has been eliminated. Now it is a broad Declaration of Principles that governments can simply add their name to if they agree. There doesn’t seem to be any mechanism for compliance tests that would prevent any government that was comfortable with it to sign on. Of course, this makes the whole initiative a lot weaker, but it also makes it less geopolitically divisive. China is still not happy with it, of course: Taiwan has signed on to it and a Taiwanese Minister was present at the public meeting releasing it. But they can no longer claim that it is part of a digital cold war.

The Declaration is not that long and can be read here. It aims to “reclaim the promise of the internet” and decries recent trends by authoritarian governments to repress freedom of expression and deny human rights and fundamental freedoms. It asks signatories to affirm their “commitment to promote and sustain an Internet” that is “open, free, global, interoperable, reliable, and secure,” and to “ensure that the Internet reinforces democratic principles and human rights and fundamental freedoms; offers opportunities for collaborative research and commerce; is developed, governed, and deployed in an inclusive way so that unserved and underserved communities, particularly those coming online for the first time, can navigate it safely and with personal data privacy and protections in place; and is governed by multistakeholder processes.” It then lists some more specific commitments in the following areas: 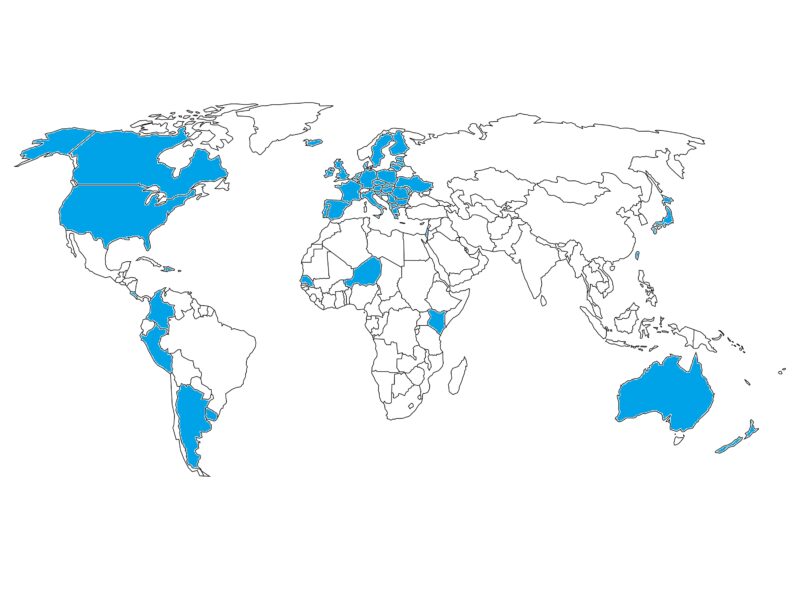 Our map of which countries have (as of April 29) signed on to the initiative shows that this, alas, largely a transatlantic initiative, with Japan and Australia/New Zealand added. There are a few Latin American and Caribbean signatories, a handful of African states, and big blank spots in the Middle East, South Asia and Southeast Asia. Among the more surprising absences:

But the U.S. has noted that membership is not closed; Biden administration spokespersons claim that others can be and will be added. Pressuring additional states like India, Chile and Brazil to sign on could be a constructive exercise.

The Declaration is a limited but useful initiative. It take a more realistic and more constructive approach than efforts to form exclusive alliances or to “weaponize digital trade.” We don’t agree with all the nuances of the policy principles – we would have like to see more emphasis on digital free trade – but it is good to see some state-backed pushback to growing authoritarianism in the digital political economy.
A tweet from Konstantinos Komaitis highlighted one of the tradeoffs in this initiative: “The [UK] Online Safety Bill is one of the most undemocratic regulations. If the Declaration …really meant what it preached, it should have excluded the UK.” We agree with his assessment of the UK law. However, as a mere Declaration of principles an international diplomatic initiative cannot (without a great deal of awkwardness) make fine-grained judgements about who can and cannot join based on specific domestic policies. At best, it allows civil society, business and diplomats to pressure governments such as the UK to be more consistent with their stated principles. Civil society activist Rebecca MacKinnon drove home this point in an eloquent thread: Protecting internet freedom begins at home, she said. “It is good to see this group of governments reaffirming and updating their commitments and inviting all of us to hold them accountable to these commitments. We certainly plan to do so.”

1 thought on “The Declaration for the Future of the Internet”